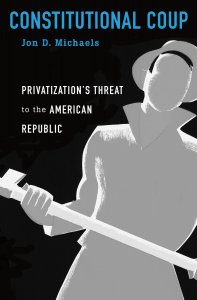 Americans have a love-hate relationship with government. Rejecting bureaucracy—but not the goods and services the welfare state provides—Americans are insisting that government be made to run like a business.  But, as Jon Michaels shows, separating the state from its public servants, practices, and institutions does violence to our Constitution, and threatens the health, stability, and legitimacy of the Republic.

Casting privatization as an existential threat, Constitutional Coup explains how the fusion of politics and profits commercializes and destabilizes government, enriching big businesses cozy with the White House while emboldening CEO-style presidents to act imperially, without regard for bureaucratic expertise, civil society, or the rule of law.

Click here to read the Introduction to Constitutional Coup.

Order it at Amazon, Barnes & Noble, or Google Books.